Well, today is Thurzday, and I normal put my cute tabby pic-fer up, but DPB has struck once again. Soo.... I guess this will have to do'z. So how many of you'z kitties out there wathced the lighting of the Rockafeller tree last night? Some of us sat with our meowmize or around her and watched it. That was a very purrty and bright tree, and just fink they light it by using tiny lil LED lights that gets the energy from the sun. I finks it would be cools to take a lil road trip to go see the big tree in person. Tj, finks it would be an Pawsome tree to climb in. Please don't mind me'z today... it is a lil gloomy here, and my meowmzie has to go to work. Well.. i havez to go fur now. Purrss...Pounce
mewed by Katnippia at 9:14 AM 8 comments: 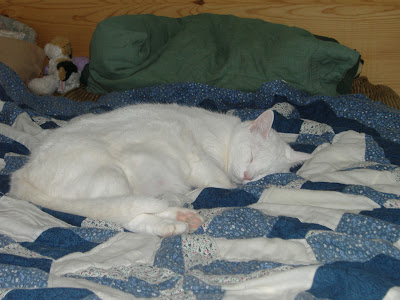 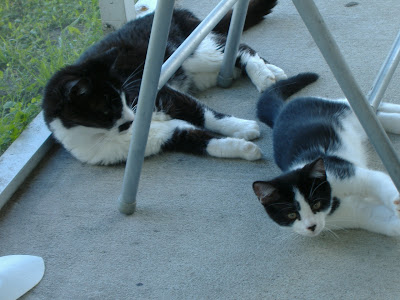 Taps: Hi eferyonez! We hopez youz had a good Monday. We chilled on the porchie today whie Sia and Marley spent time together.
TJ: Hey Taps, what is a hoo-haa-ectomy?
Taps: Umm.. why do you ask?
TJ: Because our meowmize keeps saying that she needs to get me in for one.
Taps: I think it's because you are 5 months old now, and you are growing up into a young mancat.
TJ: Is a hoo-haa-ectomy a bad thng?
Taps: Lets just say you won't miss what she is talking about, hehe
TJ: ok....I guess you would know seeing you are the oldest of us all. Thanks Taps for the info.
Taps: Not a problem TJ. Anything else you want to know?
TJ: Nope..just that. I guess i will go play now.
Taps: Ok.. well I'm going to take a nap then.
Update by TJ: I'm Kat's Cat of the day, yippy
mewed by Katnippia at 10:07 PM 9 comments: 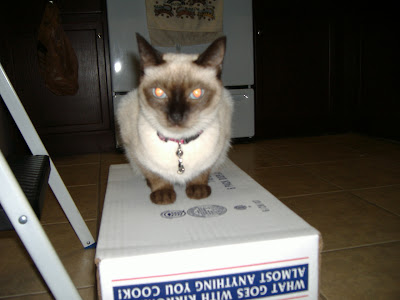 Happy meezer Monday to youz all. We hopez youz all had a wonderful weekend, we had a quiet one like normal. Except somekitty, or kitties were naughty ones and peed on the older two legged kids dirty clothes. I have no idea who that was. He didn't seem to upset by it. Anyways, I haves to get all of our toys together, because my sweet mancat Marley is coming overz today. Lets see.. I will want the micer, umm...a snuggle spot...some crunchies (Iams Multi cat)..water of course, maybe I will meowmize break out the tuna juice. Ok, well I haves to go so i can get it all togatherz. Purrs..Siamia
mewed by Katnippia at 9:33 AM 9 comments: 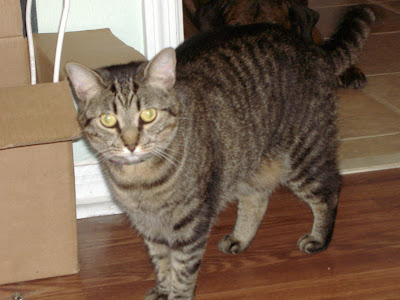 Hi eferyonez! We hopez all of our furiendz had a wonderful fanksgiving day. We had a quiet one, seeing our meowmzie had to work part of it. They went some where and had turkey, and didn't get us any. Oh, well... I finks theres some turkey in the fridge..hehehe.... Well.. I have to lwt meowmzie go..she is a lil tired and getting a headache..i don't know what that is but, she needs to rest.
Purss..Pounce
mewed by Katnippia at 11:42 PM 13 comments:

Happy Thanksgiving to all of our kitty friends, and there beans. We'z hopez youz all have a pawsome turkey day, and get some, hehe. From all of us the Katnippia Crew, and beans.....

Hi efryonez, Precious here. This is a video that meowmize took when was a lil smaller. If you'z notice I have some markings that my meowmzie finks looks like action motion mickey mouse ears. So I was wondering what youz all thought. Oh youz will also hear my meowmzie talking in the video. Well, I have to go and find a comfy napping spot now. 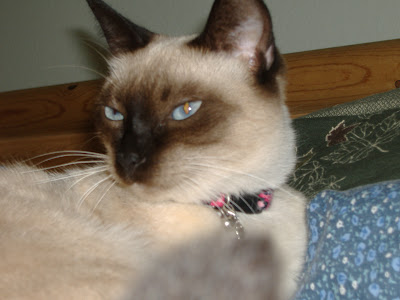 Hi eferyonez, well I hopez youz all had a wonderful weeken. We had a kinda quiet one, hehe. Our meowmzie spent some time on the computer tring to change our background but the one she wanted was going to delet out sidebar stuff and well...thatt just wouldn't work. So she said that she would work on it later. So here is one of my new pic-fers that was taken of me I finks last week. I finks we might have a tuxie movie Toozday, if meowmize rememberz to do the bloggie furz us. Well, i'm's going to go'z hunt a lizzie or wap a toy micerz. Purzz...Siamia
mewed by Katnippia at 10:53 PM 6 comments: 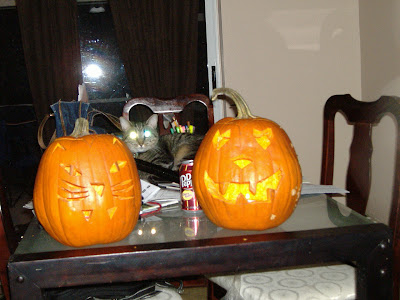 Well it's Thurzday...which means meowmzie goes back to work to make moniez fur our stinky goodness. She went to the dentist yesterday, and was gone fur a long time and came home with her jaw hurting. She says it'z because she had to get a crown prep, and her teethz cleaned. I didn't know that our meowmzie's and the dad beans had to get that done too. I finks she will be fine though, we will give her extra lovez.
As youz can see I was one of three girlz that helped our meowmize do our pumpkinz furz halloween. She did one goofy looking face and one was of a kitty face. She drew them onz before she cut them outs, We finkz she did a purr-fect jobbiez at it. Oh, we have new pics of precious and TJ (aka Demon) so youz can all see'z how bigs they are getting. Meowmzie still has not gotten a good one of Precious mickey mous-ish spots though, maybe very soon. Well, off to nap..Purrss Pounce
mewed by Katnippia at 11:44 PM 8 comments: 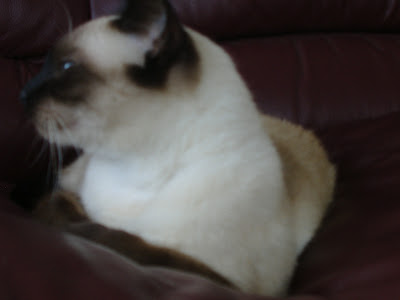 Happy meezer Monday to youz all. I hopez youz all had a cat-tast-ic weekend. We did and oour meowmize says shez not ready to go to work tomorrow. oh, well someonez has to get us our goodiez, hehe.
Ok, I has a questionz furz you all. Do any of youz have a sibling or quilty of it youz self...... Have to wake your bean up and make Bisquets on there face? I only ask because TJ has to do this to MY meowmize as she is tring to go to sleeps and in the middle of the night. Atleast when I wakes her upz I get my lovez and leaves her alone. So let us knowz, ok. Well... I have to get my stinky goodness now. Hopez youz all have a purr-fect day.Mew till next mew..Siamia
P.S Hi my sweet and handsome Marley!
mewed by Katnippia at 10:41 AM 8 comments:

Hi eferyonez! We hopez all of our kitty friendz are doing well. We have been enjoying the coler weather that we have gotten here in Flo-ree-dah lately. Our meowmzie has had the windows openz fur us too. It has been very nice and purr-fect sprint around the house weather. Our meowmzie made a turkey last night, and I finks we'z are going to get some of it in the morning. Yeap, she knowz fanksgiving is on the 22nd, but she has to work. As youz can see by my OLD pic-fer it soundz very yummiez. This one was taken of me when we lived in North Carolina still. I miss having the windows open almost all the timez. I wonderz if we will even have that again? A kitty can dream right? Well, I know atleast 3 ofhers that do. Taps could care less and the two lil onez don't know any better.The only bad part is the car ride in the PTU's. I wonder if the meowmzie could rig us up a giant play area in the back, if we did ever goes back. Well, timez to let the meowmize go t bed, seeing she has to work all day and night. Purrss..Pounce
P.S. Please vote on our poll. youz can select more than one answer if need be.
mewed by Katnippia at 1:48 AM 10 comments: 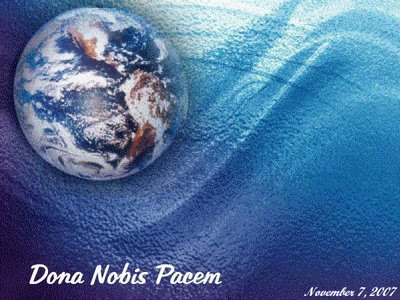 Let there be peace eferywhere! From the Katnippia Crew..Taps, Snowy, Sia, Pounce, Shamy, Precious, and TJ.
We would also likes to say Happy Anniversary to ourz meowmize and the dadz.
mewed by Katnippia at 3:57 PM 12 comments: 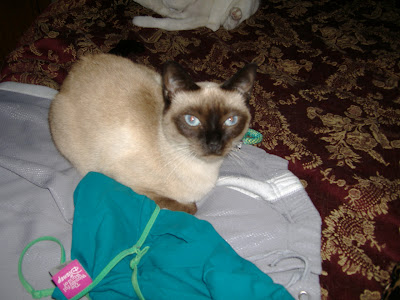 Hi eferyonez, we hopes youz had a wonderful weekend and a pawsome meezer monday. Our meowmize and the dadz went to Epcot to celebrate their 3rd wedding anniversary. It's actually tomorrow, but the meowmzie has to work a double today and aone the day after sooooooo....they went this past weekend. Thay had alot of fun and didn't even bring us anyfing from there. Although they did get us two cans of pink salmon, and a can of sardines inspring water. I wonder when we are going to get those? The dadz got our meowmzie a doll that was made in Germany, and she got his a really cool watch (NOt from EPCOT) Yet, even though they got us some goodies I was not thrilled at being left home with Uncle S. I would have much rather been with my meowmzie and the dadz. Oh, well I guess i can't goes everywheres right? Oh, we are going to do a poll on somefing. The dadz says that our meowmzie is the only one that does free feeding, wet in the morning, and gives treats, we don't finks she is. So we are going to do a poll and find outs, ok. Mew till next mew...Sia
mewed by Katnippia at 9:38 AM 7 comments: 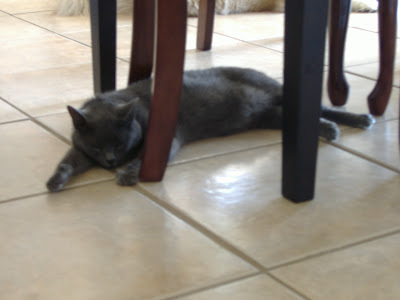 HI eferycat! Well, we had a fun and safe Halloween. Our meowmzie gave out a bnch of candy in no timez here, and aroundz 60 bags of pocornz too. She thought it would be neat to give them popcorn to. A bunch of the kid beans were like all happy furz it. You would have thoughtz she was handing out nip to us kitties, hehe. My sweet Emily I am vury happiez that i was able to snuggles with youz last nite, and keep youz safe from scary fings. Well, I has to go the meowmzie has to get ready to work fur the papers to pay fur our stinky goodness and temptayshunz. Purrs......Shamy
mewed by Katnippia at 7:59 AM 6 comments:

Katnippia
Taps 1/91/1991 - 11/4/2010 We will miss your very much. Have fun with shamy at the rainbow bridge. Snowy - 6/12/02-1/25/18 R.I.P Sweet girl. You will be missed. Siamia - I am 14 and love playing with micerz, and fev-vers. I also loves spending time watching the birds squirrels. Pounce - R.I.P Our Sweet Tabby Shamy is at the rainbow bridge 12/23/2000 - 3/29/2010 Precious-Finally found her furever home. She is missed by us but she is enjoying her new furever home. TJ...Is no longer with us. He was being kitty sat by the dadz co-worker but he escaped from his house some how. We are hopeing that he found himself a wonderfiul home or is living the life as a wild kitty in the woods and loving life. So please keep your paws crossed for him. Aladdin -.R.I.P 02/13