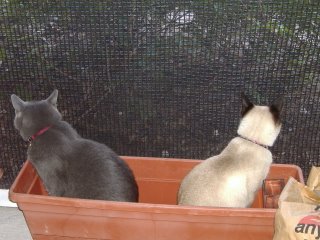 Well, I just though i would show everyone the type of flowers I grow on my porch. Here we have the beautiful apple head siamese seal point flower. With a wonderful sade of blue eyes. Then we have the rare grey manx 2 white spotted flower, with golden eyes. - The meowmize

This is what happens when you let your meowmize do a bloggy with out super-vising them. This is where me and Shamy like to chill, and hunt lizzies and ofher lil creatures. We just wanted to say a few fings that we feels is im-por-tants. First of all we are happy to hear , and read that Luna is now home. Yippy for Luna being home !!!!!!!! Ullrick went to the rainbow bridge yesterday. We luvs our kitty bloggy family, and we are fery sads to hear newsy like these. We also want to send kitty luvs and purrays to Caspersmom, and familThe ofher fing we wanted to say is that we wants to send lots of kitty purrays, and lover to Ullricks familyy for their lost of Miss Amber last week. We are sending lots of kitty loverz to you all. - mew Princess Siamia
mewed by Katnippia at 9:30 AM 8 comments:

Pounce in the tub ! 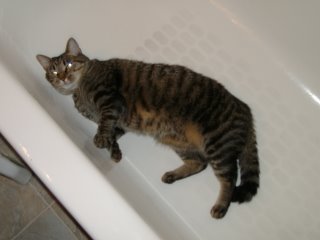 I finks the flashy thing makes my eyes look glowy. Oh, well I get to show eferyone my tan tummy with my spots, hehe. Well, I am off the pounce on somefing fun. -Pounce
mewed by Katnippia at 10:21 AM 4 comments: 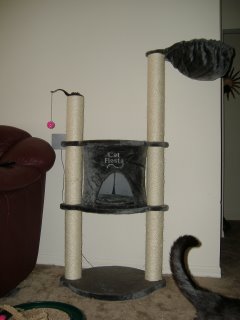 As promised here is some pic-fers of the sur-prise-y the our meowmize got us. We really luvz it. Oh, the girls were on the porchy when meowmize took the pic-fers. Well the first pic-fer is of our sur-prise-y with my taily in it. It's really funs to sharpen your lil baldes on it, and it even has a cool sleepy spot.

The second pic-fer I am sitting on mine and Sia's favorite spot. I will even sleep in the lil cubby area. It's really dark and cozy. 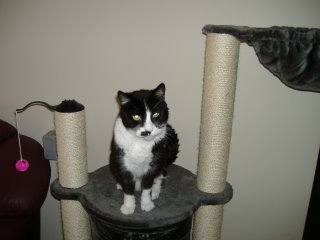 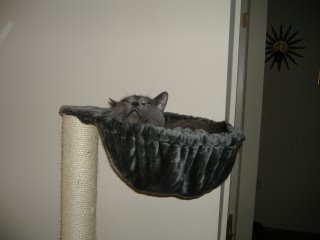 Here's Shamy in the other sleepy spot that we have on our sur-prise-yThis is his favorite spot. I finks it's because the girls don't bother him when he is sleeping there. It might also be that he blends in there, heehee. Well I am off to take a nap, and be the kitty bumm that I am. ;-Taps 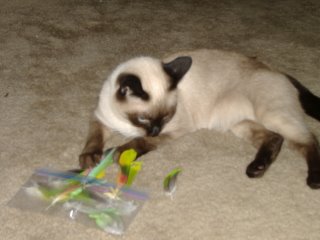 First of all I wantz to thank Pumpkin, his meowmize, and his birdie friend Quincy for sending me some fev-vers. I wuv my fev-vers. Meowmize is sorry that it tooks so long to post some pic-fers of me with me fev-vers. She had the pic-fers but the flashy thingy died and meowmize had to get some new batteries for it. The pic-fer of me on the bottom was me saying fank you for the fev-vers, it was first but blogger made it seccond. The top pic-fer is me attacking the fev-vers saying all mine, hahaha!!! Well I am off to attack the fev-vers and watch the lizzies out side. I'm a busy meezer. Mew - Sia 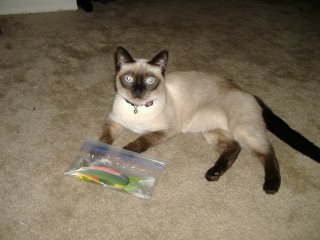 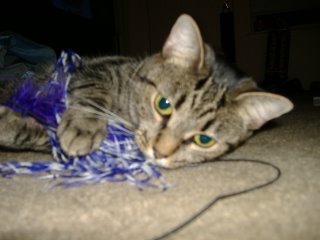 Here I am looking all cute, sweet, and not guily of anyfing with a fev-ver toy. 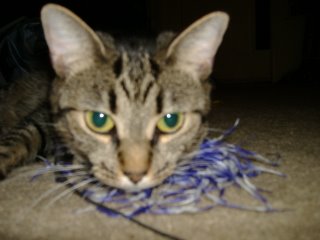 Yet, I am guilty of somefing. I didn't want to share the purple fev-ver toy. 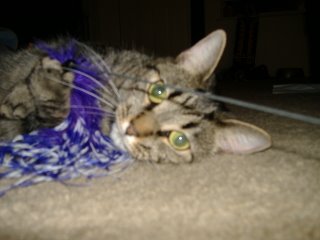 Although, I did eventually share the fev-ver toy after meowmize told me I hadz to. I even had some of the kitty nip Sia had her head in, hehe. I finks we needs to join the cat nip anonymis gang. Oh, we will be sharing pic-vers of us with the fev-vers Pumpkin and Quincy sent us, and of or new kitty surprise. Off the terrorize the rotten pupskies, -Pounce
mewed by Katnippia at 1:15 PM 7 comments: 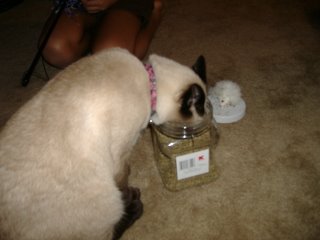 Well, meowmize had to share this pic-fer of me and my nip. Actually it's all of ours, but I say it's mine, hehe. Well we gots our surprizey, and it's really nice. It's a kitty scratchy tower, with a cubby, and a basket bed. We will pic-fers of that and me and MY fev-vers when meowmize gets some bat-erries. So do you finks I needs to join the kitty nips anonymous? Well I am offs to go play and watch some lizzies, and maybe sharpen my lil razors in a lil bit, hehe. Mew for now. Sia
mewed by Katnippia at 9:41 AM 6 comments: 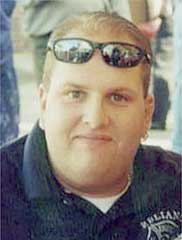 Keith was 24 years old when the World Trade Center was struck. he was one of many heroes that lost there life that day. Yet, some that knew him would say that he died doing what he loved. His mother Dian said, he was the adrenaline kid always on the run, to the New York Times. Keith worked the New York Presbyterian Hospital as a paramedic, a job which he loved. He had a passion for helping people. Keth and fellow paramedics would play practical jokes on their supervisor to lighten the tension of the job. Although when it came to work he was in command. Records show that Keith and his partner arrived at the World Trade Center minutes after the attack. They were 2 of 30 medics dispatched that morning from the hospital.His father called him around 9:10 that morning knowing that he would be there. When Keith answered the phone he told his father, that he was busy, and would call later. Keith's father tolf his son, to be carefull. neither one knowing that would be the last time they would speak to each other.

Well, meowmize has been really busy the past week, so she gave us some nip because she felt bad about it. Here I was tring to tell her, whyz do havez to take a pic-fer of me with the flashy thing. So I decided to try and getz the stringy from the flashy thing, hehe. 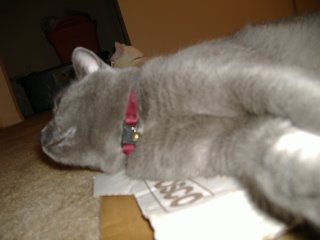 Don't I lookz reallyz cutez in these pic-fers, i finks I amz. So I asked meowmize to post them. Oh, meowmize said somefing about us getting a surprizey from the UPS person Monday. I wonder whats it could beez. She was even saying that itz somefing that shez always wanted to gets us to. When we gets it we will has to post some pic-fers of it. Oh meowmize wants to thank Oreo's meowmize for posting pic-fers of his special kitty surprize. Which is why she found our new surprize.

Also Princess Sia wants to thank Pumpkin and his meowmize Linda in Hawaii, oh, and wez can't forget their special birdie friend Quincy for the beau-ti-ful fev-vers they sent her. Meowmize is going to post some pic-fers of her and her fev-vers soon. Well, I am offs to give meowmize loverz and go chill on our porchy. Kitty huggers to all, -Shamy 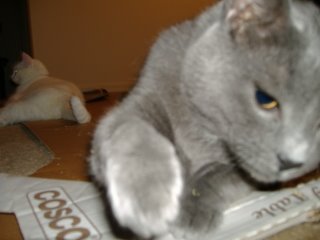 Katnippia
Taps 1/91/1991 - 11/4/2010 We will miss your very much. Have fun with shamy at the rainbow bridge. Snowy - 6/12/02-1/25/18 R.I.P Sweet girl. You will be missed. Siamia - I am 14 and love playing with micerz, and fev-vers. I also loves spending time watching the birds squirrels. Pounce - R.I.P Our Sweet Tabby Shamy is at the rainbow bridge 12/23/2000 - 3/29/2010 Precious-Finally found her furever home. She is missed by us but she is enjoying her new furever home. TJ...Is no longer with us. He was being kitty sat by the dadz co-worker but he escaped from his house some how. We are hopeing that he found himself a wonderfiul home or is living the life as a wild kitty in the woods and loving life. So please keep your paws crossed for him. Aladdin -.R.I.P 02/13